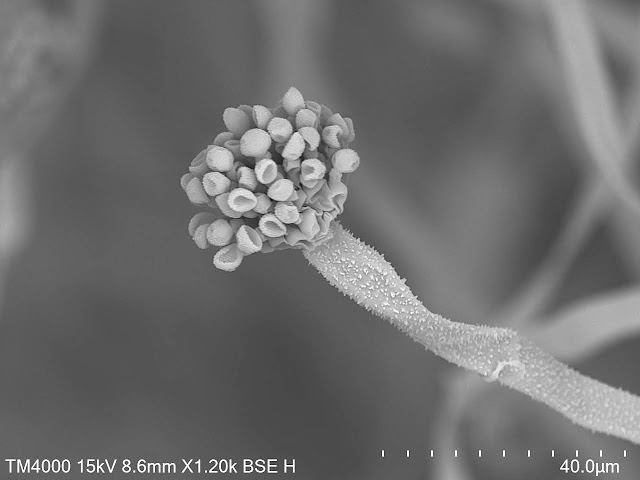 Koji is all about transformation. While growing on rice (or barley, or soy beans) the fungus Aspergillus Oryzae, known as koji, produces abundant enzymes, most notably amylase and protease enzymes. It is these transformative enzymes that make koji a key ingredient of everything from savory miso and soy sauce to alcoholic sake.

For making these wonderful ferments, koji-rice has to be prepared first. Steamed rice is inoculated with koji spores, and within 48 h, the edible koji mold will grow abundantly on the rice. When the fully grown koji-rice is then mashed with the other ingredients, the fungus will not survive the new (mostly anaerobic) environment. However, all of its enzymes will be present and ready to do their magic.

Amylase enzymes will split long carbohydrates into shorter chains, and eventually into their basic building blocks - sugars. These sugars are welcome as food for other microorganisms - for example yeast which turn the sugar into alcohol.

In miso and soy sauce, the focus is on the protease enzymes. They act on proteins, which are long chains of amino acids. When split into shorter chains (called peptides) and eventually individual amino acids, bland soybean proteins will turn delicious. Our taste buds love the resulting mixture of amino acids and peptides - pure umami taste.

But let's turn to the focus of this post - capturing the beauty of koji with a scanning electron microscope (SEM). As the spore heads are especially appealing, I've prepared koji that was incubated long enough to start sporulating (which would not be desirable from a culinary point of view). 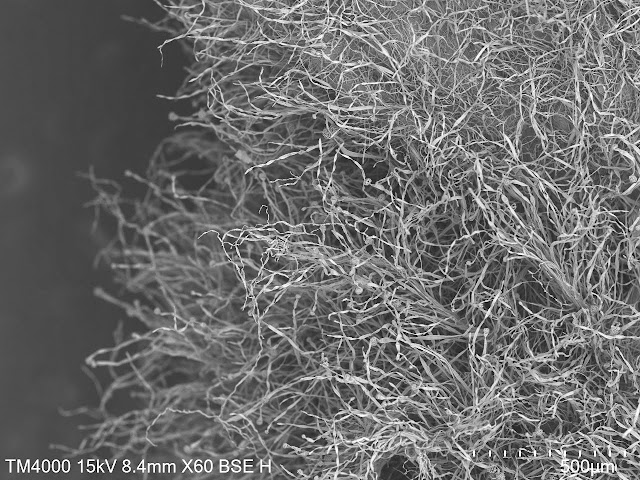 From a distance, we see the interwoven web of koji's filaments. 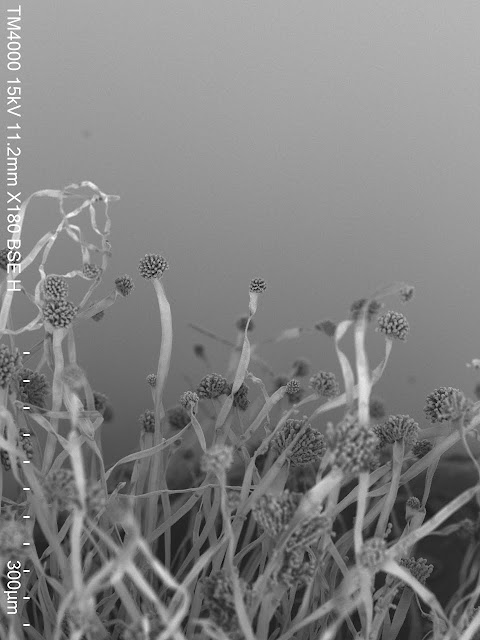 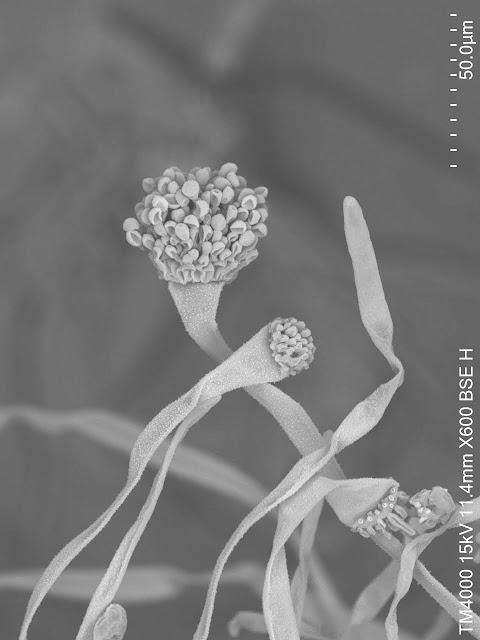 Looking closer, we can see the individual spore heads, where each spore is like a small seed. Not all of the spore heads are fully developed yet, some are just forming. To capture this process, I've taken a series of images of spore heads in different stages of their development: 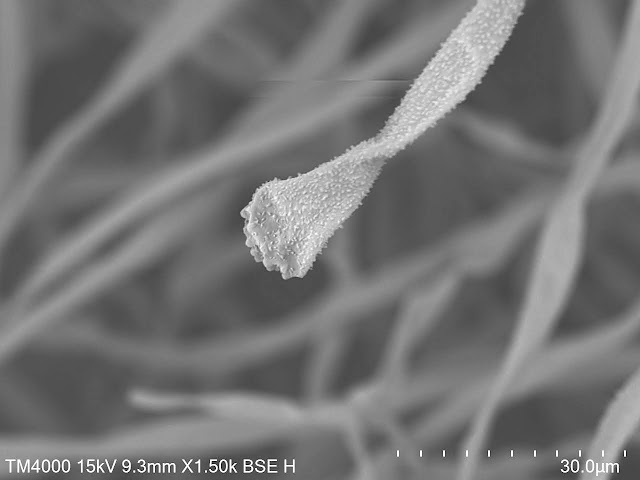 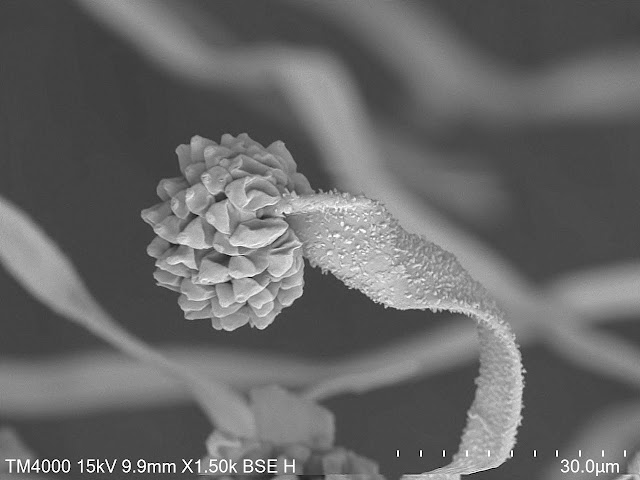 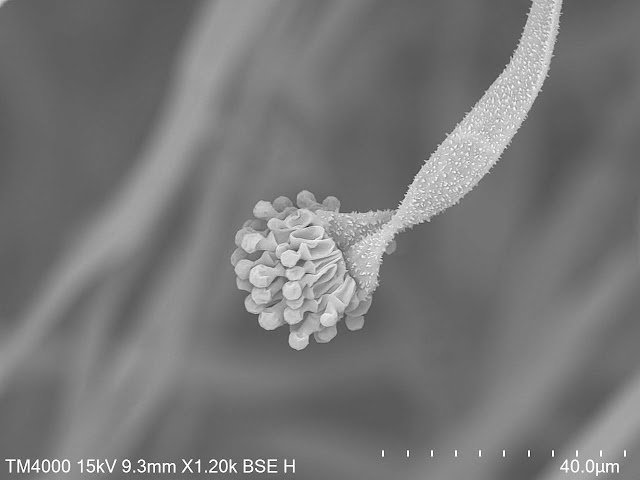 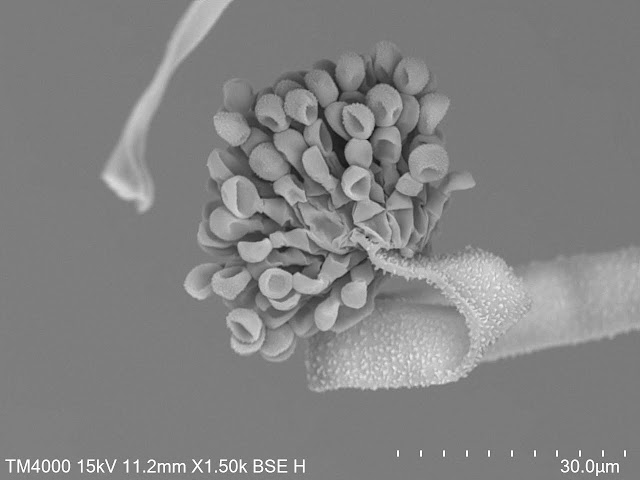 In the fully grown spore heads, the spores are arranged in a characteristic structure that can be likened to a blossoming flower. 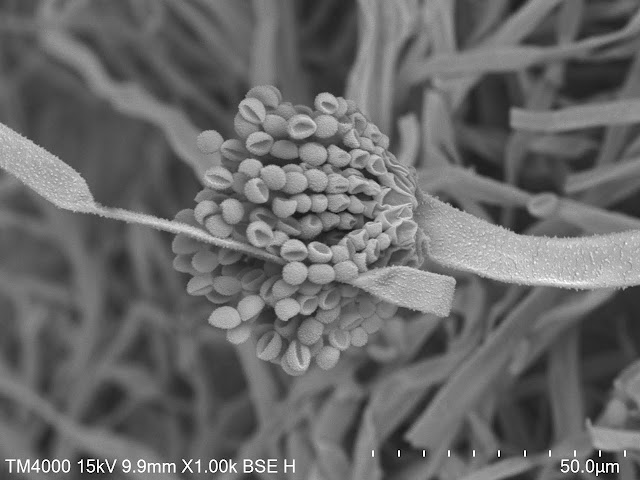 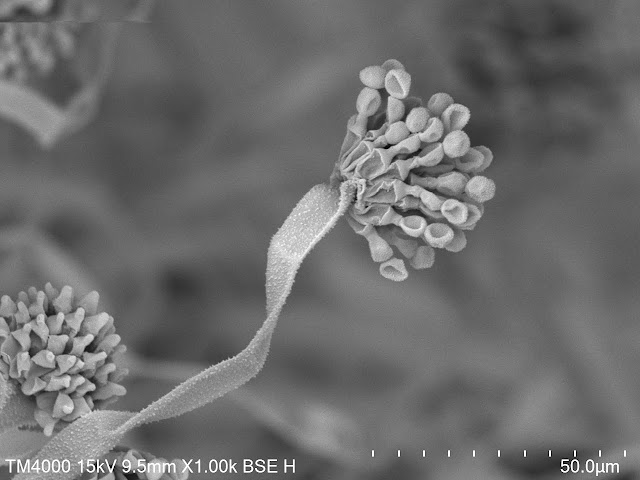 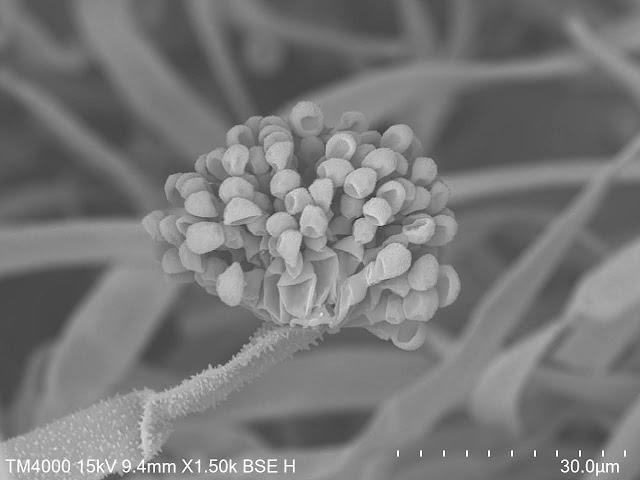 The spores will soon be released from the mature spore heads and float away to find a new place to grow - completing the koji's life cycle.

Finally, some more technical information:
The images were taken using a Hitachi TM4000 tabletop scanning electron microscope, part of the Lund Nano Lab. For preparing the samples, small pieces of koji-rice were dried at room temperature, and 10 nm of platinum/palladium (Pt/Pd) alloy (80/20) was sputtered as a conductive coating (which is necessary to obtain good SEM images of non-conductive samples).
I've grown the koji on rice using the starter from fermentationculture.eu incubating for 50 h in a water bath setup inspired by the books The Art of Fermentation and Miso, Tempeh, Natto & Other Tasty Ferments.

I'd like to thank Lund Nano Lab and NanoLund for enabling this project by supplying the necessary equipment.

I hope you enjoyed this post and would be happy if you get in touch by sending me an email (kojimaker [at] gmail [dot] com).